2015 is already being hailed as the “Year of the Mobile” with approximately one billion people estimated to use their mobile as their only form of internet access this year. This represents a huge opportunity not only for online retailers, app makers and telecommunications firms but also for banking and payments services providers who are looking to further develop the way people move money around the world using their mobile.

Nowhere is the mobile payment market developing more rapidly than in Africa and China. While economically and culturally divergent in many ways, these two territories represent a fertile testing ground where mobile payments fill the financial services void for the vast “unbanked” portion of their respective populations.

According to statistical analysis released last year by the World Bank, less than a quarter of Africa’s 1.4 billion people have a bank account but approximately 40% own a mobile phone. When you consider that smartphone penetration in Africa is expected to double in merely four years – from 17% to 34% by the end of 2018 – that’s all the more reason for mobile payments innovators to take note of the opportunity before them.

In China, Internet usage is expanding rapidly but unevenly as millions remain unable to secure reliable access. Even so, recent research indicates that China currently has an estimated 649 million internet users, 557 million of them connecting through their mobile. In 2014 mobile internet usage more than doubled with 57 million going online. Just as in Africa, large segments of China’s rural population are unbanked and those people are rapidly discovering the value of moving away from cash transactions towards the services of mobile payments providers. 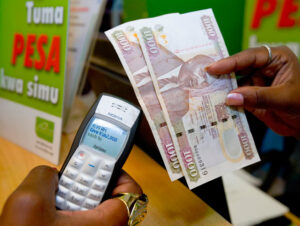 An M-banking growth explosion in the making

On average, only 4.3% of people globally were using mobile payments services as of June 2013. In sub-Saharan African, the figure was six times that — with nearly a quarter of the population paying and banking on mobile phones. In contrast, only 0.4% of Europeans and Central Asians used such services. In 2014, use of mobile payment apps in China grew 73.2%, while mobile banking apps grew by 69.2%.

This explosion of mobile payments hasn’t happened overnight but is part of a growth trend which has been almost five years in the making. When trying to understand how and why unbanked populations in these two territories are rapidly turning to their phones to move their money, Kenya serves as a model case study:

In 2007, telecommunications firm Vodacom (a subsidiary of Vodafone) launched M-Pesa (M for Mobile and Pesa is the Swahili word for money) a mobile money transfer service which is quick, reliable and easy to use. In eight years the service has grown from humble beginnings to encompass annual transactions of US$18 billion, as it provides 17 million Kenyan mobile users of every stripe – from tech entrepreneurs in Nairobi to cow herders in Rift Valley – with the means to move their money. Understandably, Kenya’s unbanked population are drawn to M-Pesa as it gives them options other than face-to-face cash transactions but even for Kenyans with a bank account there’s still a significant attraction to the service. Nairobi and many of Kenya’s other urban centres are rife with violent crime and when interviewed, M-Pesa users routinely state that security is a big advantage of the service since they don’t have to carry money on their person or in their home or place of business.

Thanks to the security and convenience which it provides, M-Pesa and mobile payments services like it have begun the process of transforming Africa’s unbanked populations into cashless ones. China’s vast unbanked population (36% according to Accion research) are quickly following suit with greater smartphone penetration and adoption of mobile payment apps.

“Mobile payment in China is not only growing rapidly, it is enabling new business models,” says  Hua Zhang, a lead analyst with Celent’s Asian Financial Services Group. “Mobile banking provides banks with massive amounts of transaction data, which they can analyze in order to develop new products and strategies.

Compared to online banking, M-banking’s chief strengths include portability, ease in obtaining the geographical location of the user, and the opportunity to analyze user behavior in ways which were previously unavailable. China’s commercial banks have been quick to develop and offer innovative services by leveraging this invaluable information as well as the convenience brought about by mobile phones. As a result, previously unbanked mobile phone users have access to cardless cash payments and withdrawals, branch maps, fund transfers using mobile phone numbers, and contactless payments. 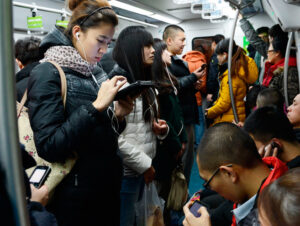 The future for mobile payments in Africa and China

Kenya is one of the leading African nations in terms of mobile payments adoption rates but even so an estimated 95% of the country’s financial transactions still occur with actual cash physically changing hands. If Kenya is an m-banking exemplar, then although popular mobile payment services have managed to secure a foothold in China and a variety of African countries, there still remain vast swathes of mobile users to convert in both territories.

The exponential mobile financial service growth experienced in the past five years demonstrates how even unbanked populations with limited or no internet access are becoming increasingly aware of the benefits of using their phone to move money. A recent Global Findex report suggests that M-banking offers direct solutions to many of the problems with traditional banking which have led to much of rural China and Africa remaining unbanked. It states that people aged 15-24 are 33% less likely to have a bank account than those aged 25-65 and in developing economies adults with a tertiary education are more than twice as likely to have a formal account than those with a primary education or less. Additionally, one third of adults blamed their unbanked status on the cost of opening and maintaining an account or the banks being too far away. By offering cashless banking services which overcome the obstacles of location and poor education through simplicity and ease of use, mobile financial services are allowing unbanked people a valid path to financial inclusion.

Additionally, rising smartphone penetration rates (34% for Africa by 2018, 49% for China by 2017) will allow mobile payments service providers to meet the demand for more sophisticated services on the more powerful devices. This combination of factors means that the pace of M-banking adoption is estimated to increase rather than slacken over the next five years.

However, in order to truly change the banking landscape in both of these territories there will need to be significantly greater levels of cooperation between mobile financial service providers, the countries’ major banks and their local governments. While adoption rates of services like M-Pesa are swiftly increasing, a lack of interoperability is a major part of what’s stopping unbanked populations from being properly connected to mainstream financial institutions. With a focus on greater cooperation and resultant interoperability, mobile payment service providers could connect their customers – banked and unbanked – with each other while also promoting greater financial inclusion through their interconnected mobile payments ecosystem.

Fraud – and resultant security concerns of mobile users – are also key factors which have reduced the adoption rates of mobile financial services in Africa and China. While face-to-face cash transactions might be inefficient and cumbersome by comparison, they do give both parties the reassurance that money is tangibly and securely changing hands.

“Internet and mobile banking fraud is on the increase as con artists take advantage of a range of systems and communication channels to pilfer account holders’ information and to access their bank accounts.”

“SIM swapping is still perhaps one of the biggest threats, particularly because it lends itself to social engineering or dishonesty by employees in some cases. But other threats are also on the rise – for example, smartphone malware designed to steal customers’ log-in information, and spoofing attacks, where hackers produce fake messages or transaction requests so that they can pretend to be someone else.” However, there are promising signs of potential cooperation as more major African banks are looking to involve themselves in M-banking as a gateway to encouraging the unbanked population into traditional banking services and products like loans and savings accounts. However, too often the dialogue between banks and mobile payments providers is being framed in terms of outright competition rather than cooperation. Last year top Kenyan bank Equity tried to move in to challenge M-Pesa by distributing ultrathin SIM cards that would enable their customers to access all their accounts without visiting a branch. Incidents like these speak of market fragmentation with each provider looking only to connect their own customers rather than encourage interoperability. Should this continue to be the norm, M-banking’s future growth will almost inevitably be measured in more modest terms. 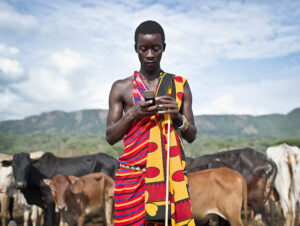 It’s evident that the mobile payments market in Africa and China will continue to draw their unbanked populations into the financial services ecosystem, even if the pace of adoption remains uncertain. Equally important are the smartphone users who are seeking greater convenience and security when moving their money, which they may not be getting from their traditional financial services provider.

In both cases Africa and China’s mobile payment boom teaches a valuable lesson which European and US banks and international online payments service providers can learn from. As the bar to mobile financial service continue to lower through greater mobile and internet adoption, consumers are looking for the quickest, cheapest and most convenient way to move their money either P2P or for making payments for retail purchases and utility bills.

With the average person now checking their mobile as much as 221 times a day and spending roughly three hours and 16 minutes consuming mobile content per day, it’s clear that mobile users are becoming much more comfortable using their device for a variety of functions, including using it as the window into their finances. For smartphone users in developed economies the priority is utilizing their time as efficiently as possible, by being able to review and access their finances whenever and wherever they like rather than spending lengthy periods of time on the phone or in their local branch. For unbanked people in developing Sub-Saharan economies and rural China, the evolution of mobile financial service is providing them with a valid means of securing and moving their money when access to traditional banking services hasn’t been feasible.

While their circumstances may be different, both audiences consider on-the-go access and security to be top priorities. The leading proponents of mobile financial services can offer services which satisfy both of these considerations and their development cannot help but have a continuing transformative effect on the priorities and policies of banks and financial institutions that aim to give more people convenient access to their traditional services such as savings accounts and mortgage products.

To make their mobile financial services as convenient as possible, service providers need to make interoperability a top priority in order to secure market penetration. There are already plenty of services offering quick and simple payments but their range remains limited as they connect only their own customers. Offering the ability to make a payment to another party, regardless of who they bank with, should be the differentiating factor which sets truly global M-banking providers apart.