Payments for the unbanked: how technology is driving financial inclusion

In some areas of the world, such as the Middle East and sub-Saharan Africa, a high proportion of adults are still ‘unbanked’. This effectively means that they are potentially excluded from everyday banking instruments, such as savings and current accounts, putting a brake on financial inclusion and economic prosperity.

However, thanks to the growth of fintechs, including Money Service Businesses (MSBs), the situation is changing rapidly. According to the World Bank Global Findex database, more than two thirds (69%) of adults, or 3.8 billion people, now have an account at a bank or mobile money provider. The number has risen from 62% in 2014 and from only 51% in 2011.

One of the key drivers of financial inclusion is the rise of mobile payment apps, which enable consumers to bypass the traditional bank branch model. In China, almost half (47%) of mobile phone owners use mobile wallets (according to Merchant Machine). Globally, 48% of 18-34-year olds use their phones to carry out transactions, compared with 29% of 55-64-year olds, indicating the future direction of travel.

Adoption of online digital banking is also growing. The most recent World Bank data confirms there has been a ‘significant increase in the use of mobile phones and the internet to conduct financial transactions’. Between 2014 and 2017, the use of mobiles and the internet contributed to a rise in the share of account holders sending or receiving payments digitally from 67% to 76% globally.

Fintechs and MSBs are having even more of an impact in the developing world, driving up the proportion of account holders sending or receiving digital payments from 57% to 70%. Sub-Sharan Africa now includes eight economies where a fifth or more of adults only use a mobile money account.

Despite the great strides forward that are being made, there is still room for improvement. Around 95 million unbanked adults in the Sub-Saharan region receive cash payments for agricultural products, for example.

In Latin America, despite recent economic unrest, countries such as Brazil and Argentina are embracing e-commerce and m-commerce as well as digital banks due to the adoption of contactless debit transactions and high internet penetration rates. It is because of this adoption, it’s predicted that digital banks will prevail over local cash-based methods such as Pago Facil and Rapi Pago.

Commenting on the data, Melinda Gates, Co-Chair of the Bill & Melinda Gates Foundation, said: “When the government deposits social welfare payments or other subsidies directly into women’s digital bank accounts, the impact is amazing. Women gain decision-making power in their homes, and with more financial tools at their disposal they invest in their families’ prosperity and help drive broad economic growth.”

Let’s talk
Find out more about how Currencycloud can help your business. 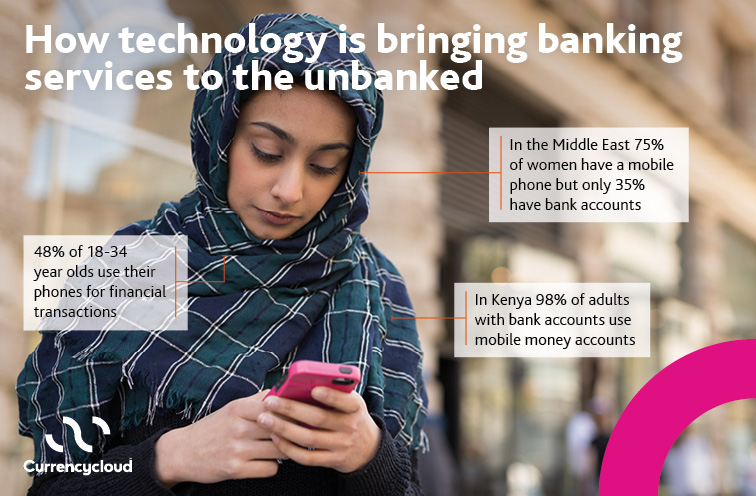 Building on that point, it’s clear that regions with the highest increases in financial inclusion are those that have seen direct intervention by governments. In India, for example, a government policy to increase financial inclusion through biometric identification accelerated the proportion of the population with a bank account to 80%.

The Government of Kenya has also prioritized financial inclusion as a key focus for economic development. As a result, in 2017 almost three quarters (73%) of adults had bank accounts, with 98% of these holding mobile money accounts.

It is not just individuals who prefer to use mobile payments provided by banks, fintechs and MSBs. There is also growing demand for mobile access to financial services for small and medium sized businesses, who want more flexibility and desire to carry out banking wherever they are, 24/7.

This demand, together with efforts to improve financial inclusion for consumers by regional governments, has led to an increase in services provided by fintechs and MSBs, including P2P transfers, Remittance-as-a-Service, prepaid cards, crowdfunding projects, cryptocurrencies, and other digital banking processes.

Inevitably, regulators have responded to this growth by introducing new guidance and reporting requirements. These may be international initiatives such as GDPR and PSD2 or regional regulations, typified by a new law regulating financial technology institutions (FTIs) introduced in Mexico in March 2018. An FTI could provide crowdfunding, electronic payment or financial advisory services.

Such regulations are particularly onerous for fintechs and MSBs. Unlike traditional regional banks, they tend to focus on global markets. To succeed and grow, they need scalable operations to address cross-border services and multiple geographies.

The good news is that there is such huge momentum behind universal financial inclusion, which governments across the world recognise as one of the engines of prosperity. Consumer demand for new and accessible digital banking services is also on the rise, particularly now that most people are equipped with mobile phones.

So the opportunity exists to satisfy the requirement to provide everyone with digital banking services. The technology is available to build the apps and processes people want to use, and there is political will to make all of this happen.

Yet fintechs and MSBs cannot address the global market alone. They need to collaborate with banks and also navigate the confusing maze of fees, country regulations and exchange rates that characterise the global payments sector.

Capitalizing on the platform economy

Instead of building such capabilities and knowledge from scratch, they can engage with a ‘plug-in’ specialist FX platform provider. This ensures that the MSB and its customers can be confident they are operating within the latest strictures of the law, have ready access to the best rates and are fully compliant.

Known variously as the ‘platform’ or ‘component’ economy, this new approach to building systems enables companies to assemble scalable modules – linking to cloud-based services that can be dialled up and down depending on need.

By partnering with a tried and tested platform like Currencycloud, MSBs are able to build foreign exchange capabilities into their service without building them from the ground up. They can also rely on Currencycloud to keep regulatory compliance and features up to date without having to intervene.

As the adoption of digital banking technology – and the regulations that follow in its wake – continues to develop, uncertainties about future markets will remain. However, the building blocks needed to create a reliable, compliant service supporting global financial inclusion already exist, providing one area of uncertainty in an unpredictable world.

Find out more about how Currencycloud can help your business.

Breaking into new global markets is a challenge for any fintech or money service business. Learn how you can overcome the barriers to international expansion and scale your business with our new white paper.