Taking on the Neobanks: it’s not too late to win the banking race

The tide has well and truly turned in the global banking industry. Banks are now truly embracing the opportunities presented by digital transformation. Traditional incumbent banks are enhancing their offerings with new technologies and, in many cases, launching their own digital-first brands.

It’s not difficult to understand why. In the UK, one of the world’s hotspots for emerging Neobanks, the Current Account Switch Service (CASS) reported that 235,918 people switched using its service in Q4 2018, compared to 265,195 switches in Q1 2019. Current account holders under 35 were three times more likely to actively consider switching than the over 55s, said CASS.

As Lewis Nurcombe, Head of Neobanking at Currencycloud explains: “This tells us that the number of people switching is not just rising, it’s likely to accelerate still further in the future in line with changing demographics. And with Neobanks Monzo and Starling claiming 10,000 new switchers in the quarter, it’s clear that customers value new and crucially more customer-centric ways to bank.”

Bank leaders agree. In a speech delivered in 2018, Lloyds Banking Group CEO António Horta-Osório said: “One only needs to consider the fate of video rental chain Blockbuster or of Kodak to see what happens to industries that take their success for granted in the face of technological change that re-shapes consumer behavior and preferences.” 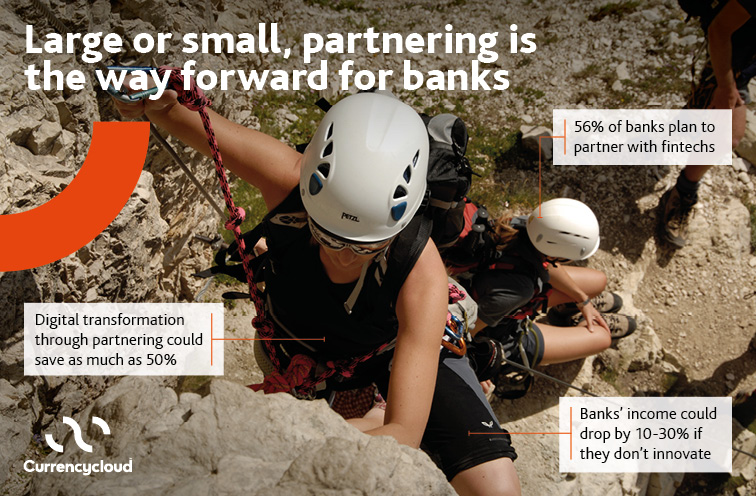 So, how will banks respond? Research carried out for Temenos by the Economist Intelligence Unit found that while 56% of banks surveyed plan to make partnering with Fintechs ‘mainstream’ by 2025, around one third are planning to build greenfield digital offshoots.

Whether partnering or developing new brands, banks cannot afford to ignore the risks to their revenues of losing customers to new players. In another recent report, published in March 2019, Citi GPS predicted that banks that fail to act would be in danger of losing between 10% and 30% of their income.

However, it also said that banks could make cost savings of between 30% and 50% through digital transformation programmes.

Lewis adds: “The sooner banks can act to meet customers’ changing expectations, the sooner they will achieve the kinds of cost savings that are being predicted. One way to do this is to follow the lead of more agile Neobanks that have had the opportunity to build services from best of breed components, rather than continue to try and build services internally from scratch.”

This ‘building block’ approach means it’s not just large global banks who are able to exploit this opportunity. Smaller brands like 150-year-old Monmouthshire Building Society also reportedly plan to join the transition with new digital current accounts. Banks need to address legacy system issues across back-office processes too – and within a tight timeline.

“Retail banking will look very different in three to five years’ time and everyone has different ideas about how to win the race,” Currencycloud’s Lewis Nurcombe concludes. “But you still need to provide better core services as part of your offering. That is where tried and tested platforms that Neobanks and Fintechs have already taken advantage of come into their own because they can be up and running quickly with minimum impact.”

Click here to find out how Currencycloud can help your business

Light a fire under your business with Currencycloud Ignite