The evolution of international trade and modern day trade routes

Over the past decade, international trade has become more tightly linked than at any point in human history. Global flows of goods, services and capital have reached unprecedented levels worth trillions of dollars every year and they continue to rise in accordance with the increasingly interconnected nature of modern trade.

While governments and large international businesses have been able to conduct vast quantities of trading with one another for centuries, it would have been unthinkable even thirty years ago for individuals and even the smallest of business enterprises to easily trade with each other regardless of their geographical location. However, with the technological improvements made in international shipping, logistics and – of course – the revolutionary impact of the internet, such trades are now a commonplace part of the modern economic reality that we currently enjoy.

Still, it has taken a great deal of time, ambition and ingenuity to forge this dynamic and free-flowing trading environment. To demonstrate this, we take a brief look at some of the key trading routes established throughout history. 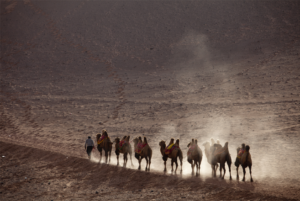 The Silk Road is a term used to describe an amalgamation of a network of trading routes that served to link the eastern and western worlds through commerce and cultural exchange as they extended over 4,000 miles across Europe, Arabia, Persia, India and China. Its name derives from the incredibly lucrative trade in silk which originated from China around 200 BC and flourished over the course of the following six centuries.

Despite the value and importance of its namesake, the Silk Road served to convey much more than bolts of silk. From its gradual establishment in the early centuries BC, right up until its disintegration along with the decay of the Mongol Empire in the 15th century AD cultural exchanges flowed as readily as tangible goods. Religious tenants, philosophies, technological advancements and ideas were transported and spread wide as the traders who navigated the Silk Road were joined by priests, free-thinkers, soldiers of fortune and all manner of adventurous individuals.

In 1640 the English East India Company – a joint stock company that grew to such vastly powerful proportions that it encompassed half of the world’s trade – leased Bombay Island which marked the start of the Company’s eventual domination of India. From humble beginnings the Company grew to monopolize lucrative trade resources and made vast fortunes from exporting silks, cottons and dyes to Europe. Critically, the EIC controlled the global distribution of India’s spices; trade goods that rose spectacularly in popularity and price.

By the beginning of the 19th century, Britain’s hold over India was complete and the EIC had such vast resources gained from their trade monopolies that they wielded more power and influence than most countries.

Sea lanes, airplanes and the information superhighway: The trade routes of today 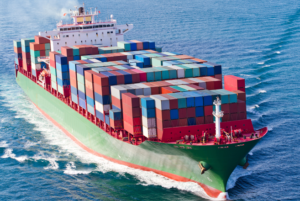 Returning to present day, our key trade routes are no longer contiguous and they extend right across the globe. Air freight allows for goods to be transported as directly as possible between countries and shipping sea lanes allow for larger cargoes to be moved, albeit more slowly. Highly developed railway systems are a vital part of the multi-modal transportation network that links business and manufacturers with their end consumers.

This new network – coupled with the digital trading empire of the internet – has grown and woven interconnected bonds to become a trade route on a scale never experienced before in human history. To put it into context, it has grown to the point where US maritime trade alone accounts for the annual transportation of goods totaling over US$6 trillion. When viewed as a whole, the global trade network – where every item imaginable is moved by plane, train, ship and truck – is responsible for the transportation of unimaginable wealth every single day.

The internet’s rapid expansion and refinement throughout its brief lifespan has led it to a point where goods, services and capital can be traded within the blink of an eye, something our ancestral traders would be understandably astonished to see! Admittedly, physical goods traded online still require transportation via air, sea or overland but the fact that they can still be moved from one side of the globe to the other within hours or days rather than weeks or months is testament to how far international trade has come. In addition, the development of  secure, reliable and cost-effective platforms for international online payments has encouraged billions of traders – from major company CEOs to individuals buying and selling on eBay – to trust in online trade despite the vast geographical distances involved.

The internet has also allowed for the greatest cultural exchange that humanity has ever witnessed. Like trade routes of old, it allows ideas and information, theories and philosophies on every subject to flow like never before. However, the internet’s reach already extends far beyond that of its historical counterparts and if it enjoys a similar longevity then it will no doubt continue to shape truly extraordinary changes on the way we live, think and make exchanges.

The biggest traders along the modern trade routes 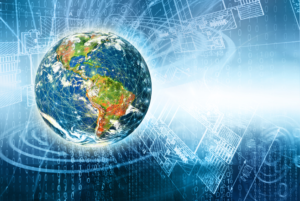 In terms of importing, China has managed to maintain its position as a world-shaping trader, a tradition thousands of years in the making. It is currently the world’s third biggest importer with estimated annual imports totaling USD$1.59 trillion. It is narrowly outpaced by the US at $2.273 trillion annual imports and the EU at $2.312 trillion.

However, when it comes to exports, China manages to turn the tables and assumes the number 1 spot with $2.21 trillion annual exports, with the EU and US trailing with $2.173 trillion and $1.575 trillion respectively.*

Thanks to increasingly interconnected trade routes, both physical and digital, the spirit of the historical trade routes still lives on. In today’s interdependent trading atmosphere, it isn’t just the likes of huge commodity conglomerates like Vitol and Glencore International that stand to gain from quicker and easier trading connections. Indeed, wholly new companies are being created in order to support the growth of international trade through providing services in areas such as logistics, processing, international payments and insurance.

If that spirit of collaboration and cultural exchange continues to exist then it seems certain that global flows of goods, services, capital, concepts and technologies, indeed, trades of every size and calibre, will continue to flourish.

*All figures are taken from the World Trade Organization (WTO) and are based on findings from 2013 surveys and statistical reports.