Developer Portal Help Centre Get Started
Get Started
Podcast May 1, 2018

Interoperability versus integration in payment data

Welcome to Payments Innovation! In our most recent podcast episode, Chris (Currencycloud) interviewed Bruce Parker (Modo Payments) about what he means when he says payment interoperability.

After two decades in the software side of the payments business, Bruce has seen a lot of technology and infrastructure challenges when it comes to managing data in payments… and navigating exchange between systems and networks among all the various participants in the payments ecosystem.

At Modo, he’s focused on how payment data gets exchanged—and, in particular, how to achieve interoperability. “What Modo does is connect the dots,” Bruce said. “We connect between the new and the old.

The key to interoperability is being able to connect those dots without changing either side. Modo doesn’t change the existing systems.

It’s a software solution to this question: How do you turn the data that’s being exchanged into the same format on both sides of the connection?

Hint: It doesn’t mean changing everything.

“And in our case, we don’t actually think that that’s necessary,” Bruce added. In some cases, it isn’t even possible. “It’s very, very difficult to change payments infrastructure,” he said.

Even when someone wants to change the software, they sometimes can’t. (The systems are being used for huge amounts of volume daily.)

Instead of integration, in comes interoperability.

“So instead we say, hey look, we’ll build a connection to the system, whether that’s new or old or something in between,” he said.

They code to the existing interfaces. So they take data from Bank of America and transform it into a version that can be “read” by PayPal’s API for payouts, for example.

A bank system has a system for communication, and so does a merchant—but they’re very different. “Our job is to bridge the gap,” Bruce said. “How do we take the information out of the bank system and recharacterize it, reformat it, and reassemble it on the other side for PayPal?”

That’s what interoperability is. It leaves both sides the same but helps them to share information anyway. 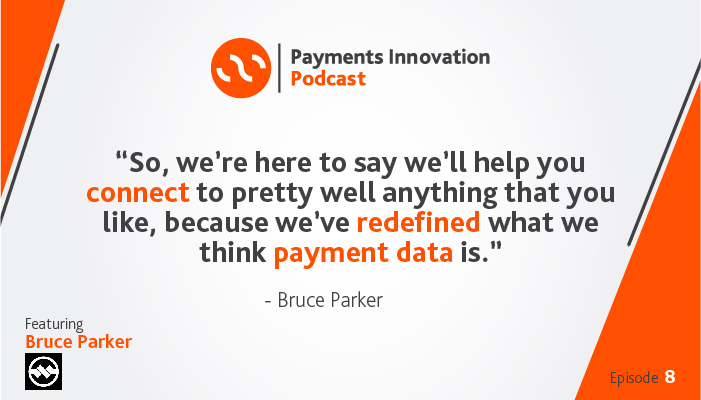 The process of bridging the gap

It depends on the client for Bruce to determine whether a potential client needs an essential workflow or a more customized system.

“So we have a number of different types of systems that we’ve already got connections on,” Bruce said.

“That’s generally where the conversation starts. What are we already connected to? And oftentimes people are trying to do the same things,” he observed.

Here are the three different categories people tend to be focused on:

The first question that Bruce asks is what system they’re using.

Banks, merchants, corporations—all use something to generate payment requests or a system to manage payments flow.

“So in the checkout environment, that’s pretty straightforward. There are store-oriented systems, either online or physically, that accept payments and process them through the various network connections,” Bruce said.

It’s important for the data to be able to travel to and from many different systems.

Could this be the precursor to an open source environment—which is more than likely where Europe and the US are headed?

In the checkouts environment, Bruce has seen a lot of businesses as providing a democratization of access to different forms of payments. And in payouts, many have made the endpoints for delivery of transactions much more accessible to a whole new audience.

Access to payment information will drive the question, Bruce predicted. “It doesn’t actually solve the problem, though. Just because the market demands it or wants it doesn’t make it any easier for existing players to provide it.”

Which is hard. Because you need to give secure access to payment data and make sure that it’s usable by somebody on the other side, but they’re probably going about it in a very different way than you are.

But at the same time, they’re all committed to existing systems or existing choices that they’ve made that constrain their ability to do anything they want.

“So, we’re here to say we’ll help you connect to pretty well anything that you like, because we’ve redefined what we think payment data is,” Bruce said.

No matter the kind of industry, payment data boils down to four component parts:

“We have built a platform that says, Okay, I’m going to tear apart every piece of payment data that comes my way and put it in these four categories—identities, transaction states, accounting or ledger entries, and commercial data—and I’m going to be able to reassemble it on the other side for whoever else wants it,” Bruce said.

In the next few years, the space of interoperability is going to be more and more essential.

Because, for one reason, banks aren’t going anywhere and integration often isn’t an option for them.

“No matter what horizon you look out over, there will always be a bank, because that’s a definitional participant inside of every economy, developing or developed,” Bruce said.

As for how the interoperability space will look, the details are changing so much so fast that all Bruce can know for sure is that it’ll look different. “There’s no question that we’re going to see a profusion of digital payments methods.”

The role of banks is likely to be the same, but they’re also highly likely to adopt the new experiences that the Fintech community comes up with. “I definitely can’t predict what we’ll see in terms of the most widely adopted experiences,” Bruce said, “but we’ll just end up needing connectivity and interoperability between the traditional financial services organizations and that world of innovation.”

He’s excited about the challenge. “There’s going to be a durable set of opportunities to solve the problem of connecting between old and new,” Bruce said.

And be sure to listen to all the episodes of Payments Innovation for more insights into the how and why of payment data.