Developer Portal Help Center Get Started
Get Started
Podcast May 27, 2021

Why doesn’t the US have real time payments?

Many nations around the world, including the UK, have these solutions, but not the US.

To dive into this question, we spoke with Tim Mills, the Vice President of Real Time Payments Business Development at The Clearing House.

The Clearing House has been around since the middle of the 19th century.  They were established to create more efficiency surrounding interbank clearing and the settlement of payments.  160 years ago, clearing checks between financial institutions was a lot easier said than done.

In the past century and a half, The Clearing House has moved to such areas as ACH payments and high value payments. They have moved to acting as an advocate around payment related issues for the financial industry.   And now in the 21st century, they are playing a leading role to modernize the payments landscape.

Tim has a 20 year background in payments including time in Bangladesh and Trinidad.  He has been with The Clearing House since 2004 working to make real time payments a reality in the United States.  In this episode of The Payments Innovation Podcast, we talk to Tim about Real Time Payments in the US, the challenges that still need to be overcome, and what the future holds.

Tim jokes that people often associate his company with oversized novelty checks, but The Clearing House has a rich history and current relevance.  They clear $2 trillion in payments on a daily basis, positioning them as a leader in this space. 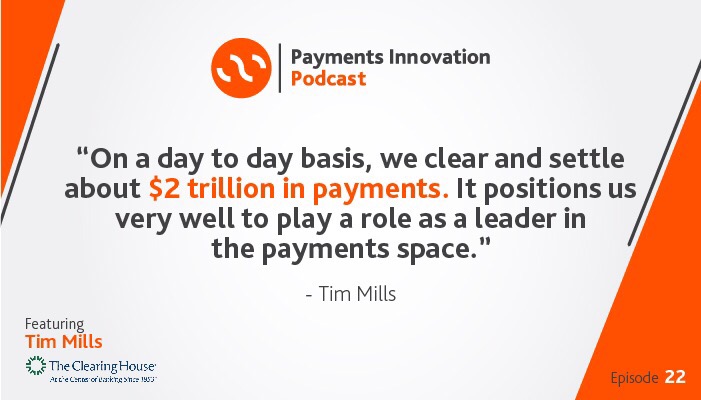 The US is lagging behind in the real time payments space.  It has become an imperative concern in the US to business owners and consumers alike.  End user expectations are driving the conversation forward here.

People are often frustrated that they can receive a package from Amazon less than 24 hours, but funds being transferred can take many times longer than that to clear.

Taking two and three days to clear a payment is an inconvenience for both financial institutions and end users. The longer funds take to clear, the more risk is involved as well.  Globally, there is pressure to move to real time payments as the US is playing catch up to much of the world. In a global economy, this is becoming unacceptable.

The challenges in the US

In the United States, compared to many other countries who already have real time payments, there are a lot of stakeholders sitting at the table.  Some countries may have around a half dozen financial institutions who need to come together and agree on which way to proceed with a RTP system, but the United States has between eight and eleven thousand such institutions.  This includes large institutions like commercial banks to smaller ones like credit unions and community banks.

Within the industry, there is a fragmented view of which way to proceed.  For example, if you were to ask a corporate treasurer and a consumer advocacy representative what the best way forward is for real time payments, they would have vastly different opinions.

Luckily, the Federal Reserve has made great strides in getting representation from all sides together.   This has paved the way for The Clearing House to begin to build out real time capability. Tim has referred to this as a gamechanger and a surefire sign of progress for the future of an RTP system in the US.

The future of real time payments

Historically, in the US, different payment methods have been pitted against one another.  Card based payment advocates lay out the reasons their method is better than ACH, and vice versa.  The dance goes back and forth. But RTP is the first system that isn’t design to get rid of established payment rails. 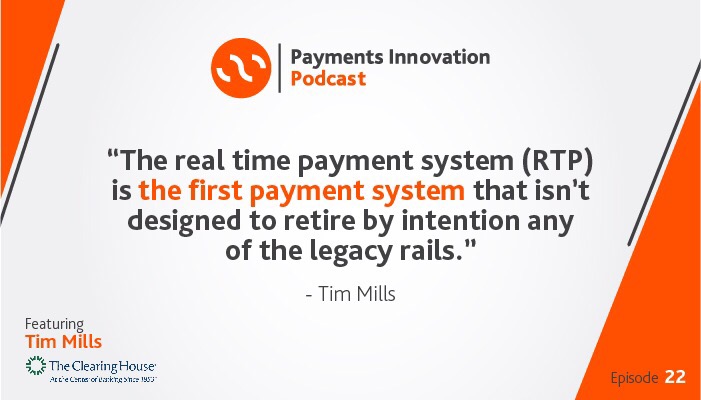 RTP is instead designed to resolve inefficiencies. For example: direct deposit. It works well as a payment method for employees, but if you take the same concept and move it to ecommerce, there are issues.

When does payment occur and when are goods/services given?  Is it when the customer authorizes payment? Or do you wait until the funds are actually in the merchant’s account?

There aren’t clearly defined lines.  But with RTP, there is greater efficiency that solves for these issues.

Because of the progress The Federal Reserve and The Clearing House has made, the US is well on their way to having an RTP system in place. There are currently 7 financial institutions on the new network with a few hundred more coming very soon.

The goal is to have a ubiquitous RTP system by end of 2020. That is defined as 95% of available accounts being able to receive or send payments. The Clearing House is supportive of this goal. It will take a lot of aggressive change, but there is enough demand that the mounting pressure leaves little room for any further delay.

If you don’t use iTunes, you can listen to every episode here.